Climate Change: What You Need to Know in 2019

Climate change is a very real, very serious challenge facing the human population – and damaging the non-human populations – as we speak. Corporations and industrial bodies globally have produced so much greenhouse gas and pollutants that the planet cannot cope. Civilian pollution also contributes to the changes, on a widespread scale. Today, we are taking a look at the major concerns of climate change, and what you need to know in 2019. 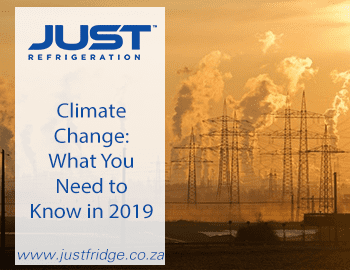 A Brief Definition of Climate Change

To start, we want to define climate change. It can be referred to as an evidenced climate system change that is discernible from natural variability, and consistent with human interference with the environment. These changes are negatively impacting the natural environment. Climate change is felt in many ways, such as increased severity and frequency of heatwaves, fire conditions, marine heatwaves, and wildlife extinction.

Greenhouse gases released from industrial bodies are generated by burning fossil fuels, which occurs on a domestic scale as well, such as driving a car and using electricity. Atmospheric CO₂ concentrations are measured at key global measuring stations, and levels have remained above 400 parts per million since 2016. The combined concentration of all greenhouse gases exceeds the equivalent of 500 parts per million, as of mid-2018. These milestones have never been crossed in human history, and likely not for 2 million years prior.

The study found that global mean fire weather season length has increased by 16.3%, with increases recorded across 23.8% of the Earth’s vegetated land surface. This translates as follows: fire seasons are lasting longer and affecting a lot more vegetated areas than was previously expected.

In conjunction, the researchers found that global burnable areas have near doubled, thus increasing the frequency of long fire weather seasons as well. With the addition of ignition sources and available fuel, fire weather conditions could drastically encroach on a large area of the earth’s surface, both developed and undeveloped.

Another area of interest that many talk about is the rise in ocean temperatures, globally, in the last 100 hundred years or so. Rising global temperatures brings with it a rise in oceanic temperatures, which has hugely impacted the volume of arctic glaciers and icebergs. With the melting of polar ice, so the global oceans creep further up their shores, as well. Global average sea level has risen approximately 20cm since 1880.

This knock-on effect Is not the only issue, however. Unfortunately, greenhouse gases and carbon emissions are also leaching into the oceans by diffusion, reacting chemically with the seawater and resulting in a lowered PH level. In short, the ocean is becoming more acidic.

This is detrimental to the health and wellbeing of myriad, if not most, oceanic life, as seen by mass bleaching events in parts of the Great Barrier Reef (to name but one) linked to marine heatwaves and acidification.

It is a bleak outlook, but we need to remember that our thoughts regarding climate change should be global, but our actions should be local. We need to introduce meaningful alternatives to our actions and purchases to reduce our domestic impact on the environment. Further, we need to put pressure on commercial organisations to meet global standards and in fact, to exceed those expectations, to do what is right.

As we look forward to our 20th anniversary in 2017, we review the successes of the business and our road to becoming the most trusted company in our category.
Our innovative products and their reputation for reliability in harsh Southern African conditions are the cornerstone of our success. We thank all of our customers and our team of committed staff members for your unwavering support.

our clients have discovered the JUST difference

Our vast customer base includes some of the most prestigious blue chip companies in South Africa, with a focus on leading beverage bottlers, top qualifying distributors and major corporates. These discerning buyers demand quality and JUST delivers!