Solid state refrigerators look set to replace typical units that rely on compressors, refrigerants and evaporators to run. In fact, they’re more environmentally friendly – using less energy, producing less noise pollution, and reducing carbon footprint!  But what is a solid state refrigerator and how does it work? Let’s take a look… 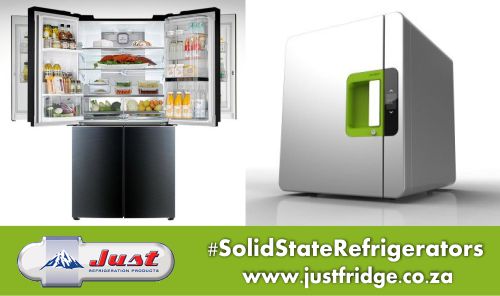 What is solid state cooling?

Thermoelectric cooling was first discovered in 1834 by French physicist Jean-Charles Peltier, whose experiments determined that when a current is made to flow through an electrified junction between two conductors, heat can be generated or removed at the junction.  Termed the Peltier Effect, this method of cooling has been used for many years in small devices and components – CPU coolers are one such example, as these disperse heat away from computer processors and prevent them from running at extreme temperatures, thereby cooling both the processing chip and the cooler. As more applications began integrating thermoelectric cooling, it was only a matter of time before this technology was applied to refrigeration.

How does solid state cooling work in refrigerators?

Refrigeration manufacturers have begun integrating solid state cooling into their units – eliminating the need for compressors and evaporators.  Instead, next-generation fridges are equipped with compact thermoelectric semi-conductors to actively move heat energy. Natural refrigerants in the unit absorb this heat energy, and transfer it into specialised tubing which is cleverly dispersed away from the fridge through a solid state heat pump.  There’s also the development of solid state fridges that use magnets for cooling.  Materials such as gadolinium, a silver white metal, heat up when placed in a magnetic field. When the heat energy and magnetic field are removed by fluid in the fridge, the gadolinium automatically cools to below its starting temperature.

What will solid state technology mean for the future of refrigeration?

Until now, solid state refrigeration has been used in smaller fridge units with a minimum temperature of 4°C, and small freezers running at -20°C. Going forwards, however, we can expect technological advancements in this area to pick up pace, and to be applied to both home and supermarket refrigeration equipment. Solid state refrigerators offer numerous benefits, including:

As we look forward to our 20th anniversary in 2017, we review the successes of the business and our road to becoming the most trusted company in our category.
Our innovative products and their reputation for reliability in harsh Southern African conditions are the cornerstone of our success. We thank all of our customers and our team of committed staff members for your unwavering support.

our clients have discovered the JUST difference

Our vast customer base includes some of the most prestigious blue chip companies in South Africa, with a focus on leading beverage bottlers, top qualifying distributors and major corporates. These discerning buyers demand quality and JUST delivers!